The dragons of Daenerys Targaryen have captured the hearts of viewers of Game of Thrones. Fire-breathing and powerful, able to destroy enemies in a quick blow, they are the majestic creatures we all wish to see. In the real world, though, dragons do not exist. Seeing them is simply not possible, but that does not mean we cannot get close. In your travels to El Teide, Tenerife, you can see the local wildlife. One such wildlife is the Tenerife lizard, as close to dragons as we have. Though not large, winged, or fire-breathing, they are majestic all on their own and certainly a beauty to behold.

With males able to grow to just over a foot in length, these are sizable lizards. They are like baby dragons, similar to the dragons in Game of Thrones when they originally hatched. Large and beautiful, they really do fit the majestic image you would want. It is part of the reason they remind some people of dragons. While they are in no way related, obviously, they have the same beauty and distinctive appearance.

Part of the appearance is their colorful markings. These lizards stand out for their appearance, being large and beautiful. They attract a lot of local attention for that reason, too. People love seeing the lizards and they add more to the visit. 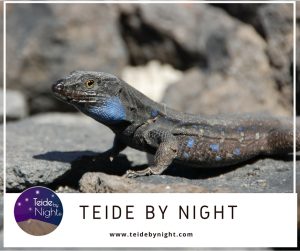 The Tenerife lizard got its name because it is only found here, on Tenerife. You can only find it on the western islands of the Canary Islands, nowhere else. If you want to see these astonishing lizards, you will have to visit the islands yourself. They are a common species here, with numbers that stay somewhat strong all year. No matter when you can visit, you can catch a glimpse at one of the lizards yourself.

These are friendly, fruit-eating lizards that roam the western islands for their entire life. If you have always wanted to see something similar to dragons, something that gives you the same amazed feeling, this is one of the few times you can.

You can visit the Tenerife islands, and the Tenerife lizard, at any time. It is one of the most captivating local species here, with an appearance that draws people in and makes the visit extraordinary. Whether you are a lover of dragons or someone who wants to see local wildlife, this is the species that will catch your eye.